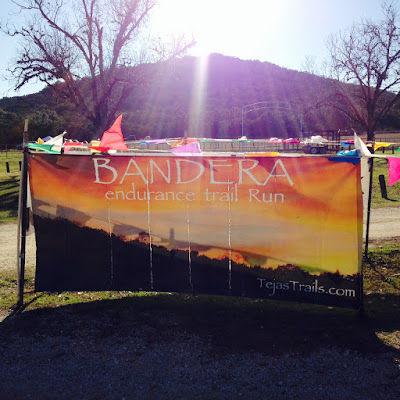 I'm often reminded that the things I anticipate being tough before a race don't end up being the toughest things - never more true for me than at the Bandera 100k. A rugged old trail full of surprises (well, on the first loop anyway).

Although still keen to follow my less racing is more strategy for 2016, admittedly I did sign up pretty last minute for Bandera after seeing the date fitted nicely with a US ski touring trip to California - just a hop, skip and three state jump away. For these reasons:
Pre-race I was a strange mix of super chilled after a couple of weeks of being outdoors everyday and apprehensive due to minimal distance run training and a nasty sickness bug I had for days in Tahoe, which had subsided but left me not feeling quite myself. So all in all in holiday-mode, not race-mode.

The 100k was a double loop of a 50k route around Texas Hill Country State Park, outside the tiny town Bandera (dubbed 'Cowboy Capital of the World'; yup horses have right of way on these trails):

The first five miles were a slap in the face - or rather the legs - with large Sotol cacti, also known as Prickly Pear, fringing narrow sections of trail. To either side were wall to wall fields of these plants - with sharp, serrated edges snaking every which way - so there was no sneaking around them.

Glancing down at my bleeding legs at the first aid station, Nachos (with no nachos, sadly) I wondered if I had the mentality to keep ripping them to shreds for 57 more miles - was the cacti really this bad for the entire route? Race Director Chris McWatters' words were ringing in my ears; "you won't feel it at the time but the after-race shower will hurt". I was feeling it five miles in! 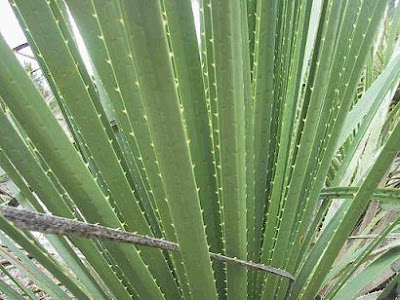 And it was certainly rocky, for many miles on a par with the Larig Mor section of the West Highland Way with more short, sharp ups and downs, on which I rolled that UTMB ankle no less than four times in the first loop.

The next section was not so bad; some short field sections, beautiful smoother trail and no Sotol. And a bluebird day, no clouds in the sky and 18ish c with a cool breeze - just about perfect if you forgive the wind and midday heat. Afterwards came a very gentle but miles long incline before we hit an out/back section from Crossroads aid station, which led us up the Three Sisters - another three sharp but baby climbs, which again were covered in cacti, this led to a lot of staring at the ground so I wasn't appreciating any scenery at this point. My legs felt sluggish and slow but after the Sisters the trail was really runnable, just two more short climbs of a few hundred metres - including Boyle's Bump right before the lodge at the start/finish line - and mercifully no more cacti until the second loop began again.

I saw Giles at the 50k mark, he'd just finished the 50k race minutes earlier in a really strong 11th place, 5.10 time. A real boost. Some refilling, nutrition and back out for the next loop. I wanted to run it in under six hours. The first tough section predictably felt longer, harder and spikier but it helped knowing what was around the corner and as each aid was pretty much exactly 5 miles apart it was easy to mentally break it down and take it step by step without feeling the larger distance.

On that note - what aid stations! Small yet perfectly formed, stocking Tailwind, gels of all sorts of variety, peanut-butter filled pretzels (oh yes), all sorts of fruit, Mountain Dew, Saltsticks, Coke etc. and face wipes. How amazing it is to wash your face through a race. Admittedly maybe I shouldn't have spent time on this. I got some quizzical looks when I said how hot I was finding it, I guess for the locals helping out it was a winter's day.

I felt far stronger for the last 20 miles than I had for the entire first loop, fired by finally letting myself turn on some music and take some caffeine gels. Alicia Hudelson and Liza Howard had passed me early on in the first loop and then I passed another girl (Katie Graff I think) before passing a handful of men in the second loop. I didn't think any other ladies were nearby but didn't really know and was enjoying pushing hard to regain some time. Giles surprised me at Crossroads, an amazing boost. I gritted my teeth for the final cactus assault of the day up the Three Sisters, which passed quickly enough. Then again at Last Chance, the final aid, he was there - dressed to run again for the final five miles (pacers were permitted from 50k in but I had no idea he'd want to run again). Company for the last section was magic, especially as the last three miles brought darkness on one of the rockiest sections of trail, calling for total focus for a sub 11.30 time. I hope he wasn't expecting a lot of chat, mine had gone missing in action. We crossed the line in 11.28 and the lovely race people thrust a pair of horns in my hands before I promptly collapsed into a camp chair to gather myself. 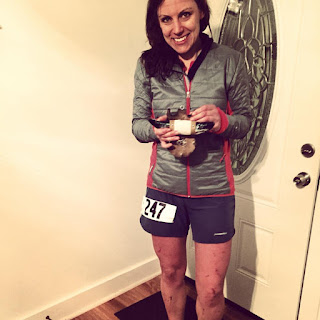 It was some trip, worth it for the Vitamin D and Texan horn trophy alone (a key rack, how very practical!). Turned out this was for first 30-39 female (the first five ladies were overall championship trophy winners). 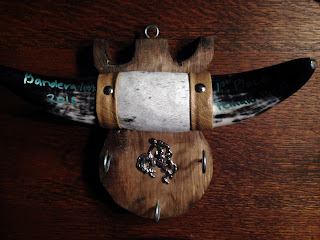 One day I might go back. With full body cover.