Having been out of action for the third time in the last year with an injury, I've been sulking too much to want to write about running, but now it comes to it its amazing to remember the miles of the Tahoe Rim Trail, which was an all round incredible running experience.

I flew to the States a week early, heading to Boulder first with the aim of acclimatising then over to Reno four days out from the race. What a town. Framed by the foothills of the Rockies and the beautiful trail heaven of Chataqua Park and the Flatirons, Boulder is a free-thinking haven for outdoorsies, with cycle trails and pedestrianised centre dissimilar to many other American towns. On my first trail run, after a blissful five miles,
I hit the deck hard downhill, managing a seemingly impossible scraping of the shoulder, elbow and knee. I thought I'd broken my arm given the bump and bruise that emerged, but reckoned if I could still move it without a lot of pain it must be fine. I was more worried about running the TRT in five days time with a skinless shoulder.

By Friday though it was beginning to heal up and after a few days of fun scoping of the trail with Rick and Dan I was good to go for the start on Saturday. I'd covered up with a dressing and was now more worried about the occasional pain and pulling right in the top of my left quad/groin, which I'd had for a few weeks but which hadn't been bad enough to stop running - actually thought it was a yoga-inflicted niggle. It had started bothering me more in taper week but all I could do was take the race as it came.

The TRT is run mostly on alpine forest trails in the Carson Spur of the Sierra Nevada mountains, above the  'Big Blue' Lake Tahoe and a few other lakes. Total elevation gain is just under 9,000ft, with the highest point at 9,200ft and the lowest just under 6,800. Even though the Tahoe Rim Trail itself is a long distance 165 mile trail around the lake, the race course is a series of out and backs for logistical reasons - starting and finishing at Spooner Lake in the north east of Lake Tahoe. 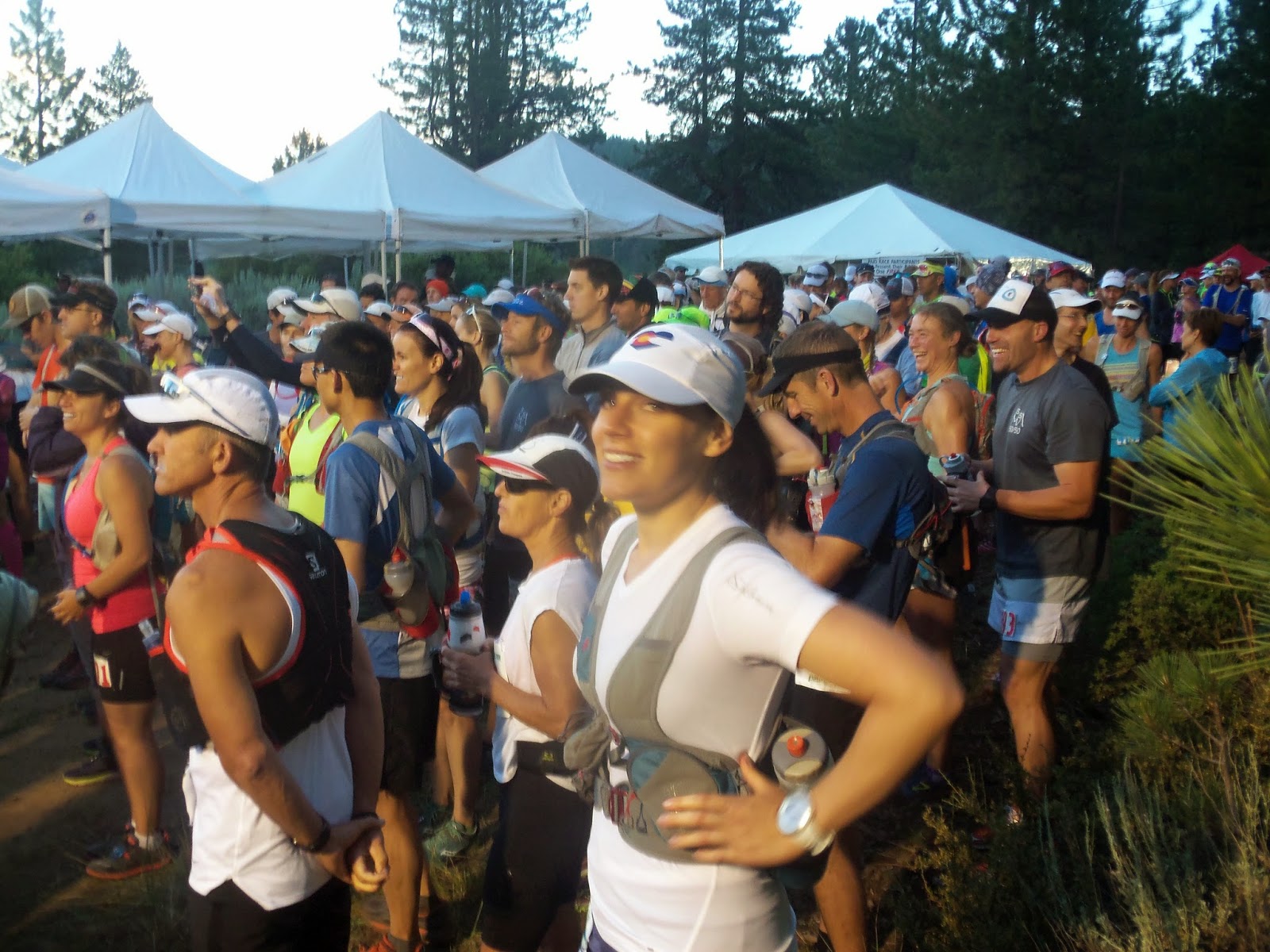 Hundreds of us set off from Spooner at 6am, for a gentle mile or two until we reached the Marlette Lake Trail which climbs 1500ft through conifer and aspen groves to reach the Tahoe Rim. My sole aims were to run, breathe steady and NOT FALL. Or fall on my left side. The views of Marlette Lake just after sunrise were absolutely spectacular, I wished I'd brought a camera as couldn't stop thinking to myself that I'd never capture that moment again. Soon came the Hobart aid station which I'd read was pretty legendary and it didn't disappoint, with a smoothie bar and a juggler on stilts. I didn't stop and got chatting to a lovely 50k runner - should I be running with the 50k's?- who I disovered was Dan's friend he'd told me about, aiming to place in the 50k. Nope I should not be running with her. I didn't feel like I was pushing but began to hang back.

The next five mile section brought some beautiful single-track trail with panoramic views. I was in a chain gang of runners, mostly guys, one of whom took a bad fall but seemed ok. It was good to have company and pacing. Then into Tunnel Creek - a decent sized a/s that we would come to three times due to the out/back nature of the course. It was great to see Dan and Rick there and I swiftly re-fuelled on something I
can't remember (generally Lara bars/fruit/water/electrolyte/coke throughout race) and headed down for the notorious 6-mile Red House loop. It kicks off with a couple of mile/1,000 ft downhill on sandy trails into the airless depths, another aid station, then back up for the slippy, sandy climb that folk call the 'glimpse of hell' of the course (although I'd seriously contend this now knowing what was to come!).

After passing through Tunnel Creek again came a rolling 6-mile section along the TRT. I hadn't been on these sections before as it is so remote to reach and didn't expect it to be quite so rolling,but the trail landscape was again stunning, soft single-track bordered by alpine wildflowers. A small water stop was ahead 3 miles and I reminded myself that I had to fill up properly here, for the next would be 8 miles away in the heat of midday. I had an idea that I was in fifth lady position since Rick shouted the place through Tunnel Creek but the only 50 mile runners I saw for most of the
race were guys, I got chatting to a few and passed a long string of 100 milers. The 100 had started an hour before us and I was constantly amazed at the pace of the runners, particularly the guy who ended up winning - Bob Shebest - in sub 18 hours, an incredible feat at elevation and on such a course (they run the 50 course twice).

Diamond Peak a/s was a target for me with a plan to reach it in 6 hours. At 30 miles and at the foot of the toughest climb in the race I wanted to be in good condition there. A couple of miles before though I must have lost focus and tripped over a stump, slamming down on the trail, yup - right shoulder first. More annoyed with myself than anything, I kept expecting it to get messy and bleed through the dressing but it didn't happen. I took a dip in a creek at the bottom of the descent to get rid of the trail dust over the skint knees and ran into Diamond Creek. Brilliant again to see Dan & Rick and by this time predictably I wasn't too excited about solid food, instead filling up on coke and taking a bar for the climb. 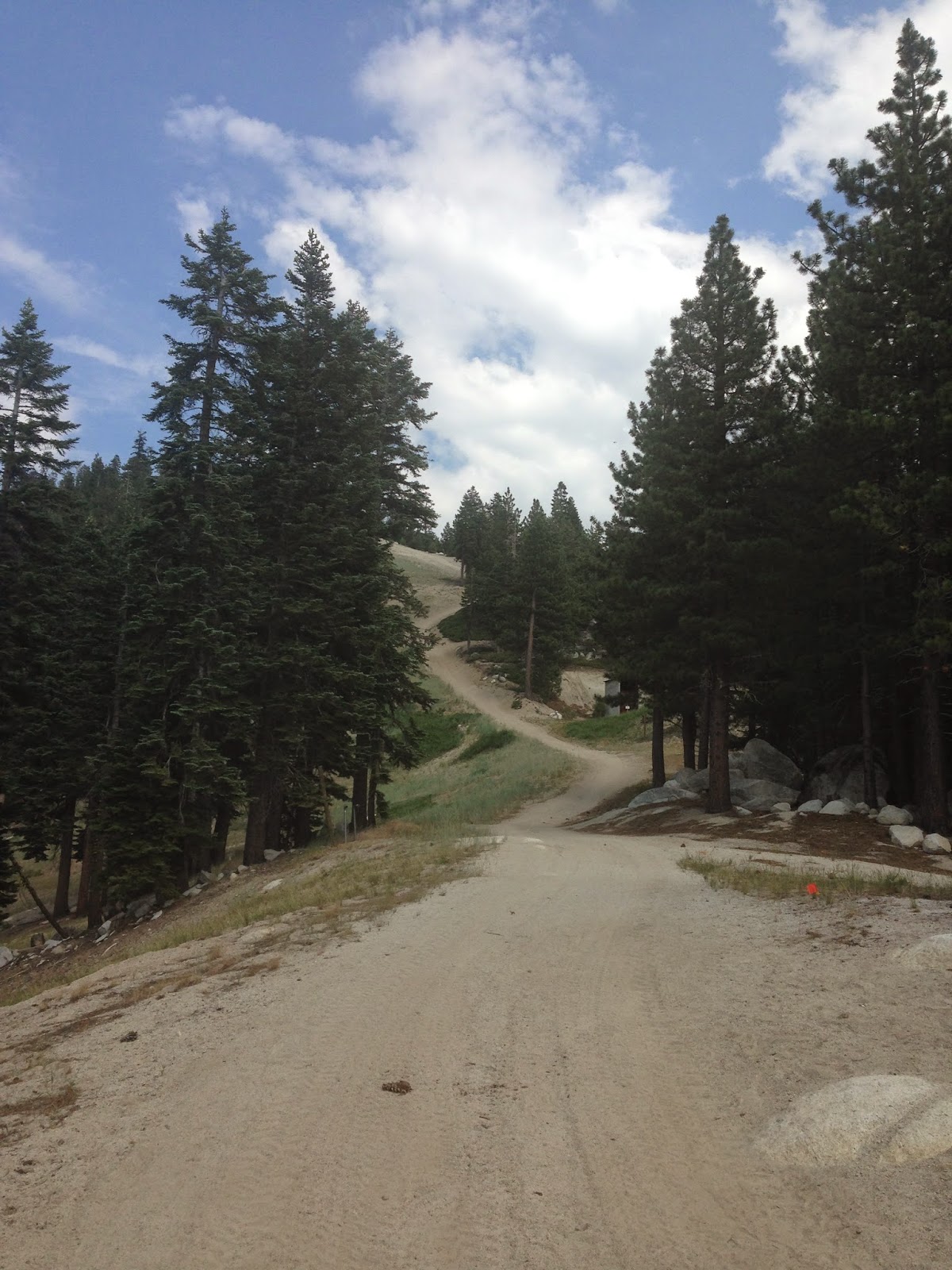 It was something else. 1,700 feet directly up a sandy pathed ski run in less than two miles. No switchbacks, no shade. It seemed longer than when Dan and I had ventured
up there earlier in the week (when I'd refused to stop and fast hike all the way up, much to Dan's frustration!). It was so steep there wasn't even a chance of fast hiking and I couldn't work out if the struggle was about altitude, fatigue or heat but I had to pause a couple of times on the climb. Chatting to a few 100 milers all I could think was how they had to take this on twice, the next time at 80 miles in.

I'd originally been registered for the 100 and have now developed huge respect for anyone who takes this race on, it is one hell of a 100. I'd say tougher in many respects than Western States, despite the fact temps can be cooler.

The climb shook me a bit and I lost time. At the peak we took a right on the trail to connect again with the trail back in the other direction to Tunnel Creek. I couldn't believe how much I was drinking and worried it was too much - I'd emptied two bottles in two miles up the climb and was still thirsty - plus no toilet stops for the entire race - probably not healthy. I managed to get a bit of pace back slowly and reached Tunnel Creek feeling revived but craving coke.

I struggle to remember the penultimate section back to Hobart circus, just that drinking a smoothie AND coke is not a good combination, and my muddled brain remembering that climb Snow Valley Peak, the highest point of the course, was still to come. I'd hoped I'd be able to run this climb but it just wasn't going to happen so I hiked as hard as I could handle, reaching the beautiful plateau-like summit and a/s run by the boy scout troop. The views were outstandig up here but I was watching the clock by now and keen to get off the summit.

The home straight: I didn't care about hammering the quads on the 5 mile descent back down to Spooner, although the pain in the top of the muscle was now constantly nagging. I was really hurting after a few miles but I spotted another female runner ahead and tried to focus on leg turnover and form to see if I could maintain speed and catch her. I didn't think she was a 50 miler but found out she was after finishing (she finished a few
seconds ahead of me so I was kicking myself). The downhill seemed like it would never end but eventually we reached level ground and the final (abandoned) aid station, which the kind volunteers had left stocked. By this point the sky was darkening and I sensed the thunder was close - I'd been in Colorado/Nevada for seven days so far and there hadn't been one afternoon without electrical storms, generally starting around 2pm. But I was already back on the final two mile flat around Spooner Lake, and could hear the buzz of the finishing straight for the 50 and the (separate) 50 mile aid station for the 100. I was able to push hard for the last stretch and finished in 10.57 to be met by a couple of volunteers in hot pink micro tutus and fishnets. I was told I was fifth lady but found later it was seventh lady overall and fifth in age group. Happy to squeeze in the top ten and not without a battle with the leg.

Literally no more than 20 minutes after and a monster thunderstorm hit. The finishing area was transformed into an apocalytpic scene with rivers careering past the tents, children crying, drop bags being soaked, lighning and hail. It continued for an age and all we could think about were the 50 milers still out there and worse still, the 100 milers out there without shelter with over 50 miles to go after being absolutely drenched. It turned out that the Snow Valley Peak a/s had to be shut down due to lightning danger and runners had to shelter with volunteers for an hour or so.

Without a doubt, TRT was one of my all time race highs - tendinitis issue aside - for the pure fun and beauty of the trails out there. One special race. Maybe one day I'll try the 100 but it will have to be an injury-free, brave day.

Thank you to Dan and Rick for all your support before and on the day! I'll be back :-)