Not being at all a 'techie', I was slightly apprehensive when lovely researcher Lesley, who manages the Napier Uni climatic training chamber I've been using, suggested that in addition to my heat training programme, I take metabolic efficiency tests, including VO2max, in Feb and May to help monitor training.

Metabolic efficiency is basically used to describe the use of oxygen relative to a physical effort. From a nutrition perspective, being metabolically efficient means being able to burn more fat and conserve limited carbohydrate stores. The skinny on VO2max - which embarrasingly I didn't know too much about, apart from the fact Kilian Jornet has a ridiculously high one - is that it's an important measure in performance capability in middle to long distance running. It is the highest rate at which oxygen is taken up and used during exercise, with the volume expressed relative to body weight.

The results of the first test would aim to inform and aid my training plan, for example by suggesting heart rates to train in for different sessions, therefore improving my aerobic base. The second would aim to demonstrate any improvement in my aerobic capacity (hopefully!). The real aim of improving aerobic base is to improve ability to perform maximally during my races, and help me recover quicker.

So in the session Lesley tested a variety of things to determine my efficiency:

1. Resting Metabolic Rate
She took an initial assessment of baseline info such as body mass, weight, blood pressure and heart rate which would be used to monitor any changes that occur with my training. For this I had to abstain from food for 4hrs beforehand - probably good for the weight measurement! I had to lie for 10 minutes resting in a supine position - again difficult as I'm a massive fidget - after which Lesley recorded data for 10 minutes.

2. Ramp Aerobic Power Test (VO2max)
The treadmill test - eek! This is descibed to me as 'a multi-stage incremental test to determine peak heart rate and VO2 responses to a range of running speeds, until volitional exhaustion'. All I could think of was the footage of Sir Chris Hoy after the Olympics talking about his training to exhaustion which was usually accompanied by throwing up next to the bike. Not that I am comparing myself to Chris Hoy.

The test would consist of running at a certain pace for 3 minute blocks before moving up to the next speed with no recovery in between, until I could no longer run. So Lesley started me out on the treadmill, hooked up to an oxygen mask and heart rate monitor to record everything, at 11km per hour. This was ok, my steady/recovery gym treadmill pace in interval sessions. She then increased by 1km per hour every 3 minutes with gradient set at 1%. By the end of the 13km per hr block I was working hard. By the end of 14km per hour I was wondering what would happen if I fell off the treadmill and ripped the mask connections out the computer. By 15km per hour I knew that this would be my last 3 minute block, but as Lesley had pointed out before that you have a better test and higher score if you try your best to reach the end of a certain block, I tried hard to do so and just made it. So 15 minutes in all and to the end of the 15km per hour block.

During this my running economy (RE) was also measured. This is a measurement of how efficiently you use oxygen at a given running pace. Improving RE means you are using a smaller amount of oxygen to run at a given speed (i.e. using a lower % of VO2max at any given pace).

Lesley told me a 2008 research study reported a VO2 max of 49.1 in a group of female ultra runners (mixed abilities) so I was pleased to be higher than this but obviously this can be very much improved on.  For info, here are the VO2max scores across a range of other sports: 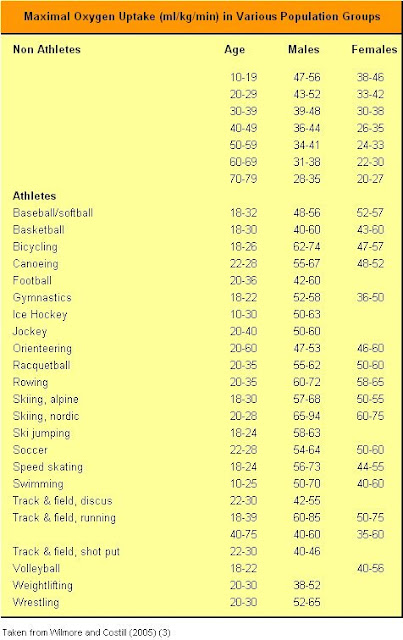 My best Running Economy (RE) score occurred at 12km per hr, which is my PB marathon pace (3hrs 26 mins). So my aim should really be to increase towards this running pace in all my longer events. Hmm not sure about the Western States though!

Lesley is also hoping to see my heart rate lower throughout training and before June, again indicating I becoming more efficient and not having to work as hard at the various workloads. She has given me some specific heart rates to train in for the next few months to help this.

Living the Low Carb Lifestyle
I think pretty much any and every runner exposed to the media/Internet in recent months will be aware of the craze sweeping the world for paleo and low carb diets and lifestyles and I've been reading and listening to a heap of sources which have focused on the benefits of these dietary approaches for long distance running. So I don't want to bang on about it too much as quite frankly I'm not an expert - but the whole concept of this dietary change is closely related to metabolic efficiency.

The aim for the runner of adopting such a nutritional approach is to train the body to burn more fat when running. Unless trained through diet or perhaps fasted training, typically a runner will burn more carbohydrates than fat unless running VERY slow and the idea is to encourage the body to tap into the huge store of fat and at higher speeds. The experts say that any person, no matter if they have low body fat to begin with, has a store of 30,000 - 40,000 calories in fat, but only 2,000 calories of carbohydrate, which is stored as glycogen in the muscles and liver, and fat is a much more efficient macronutrient for the body to use in the first place. Saying all that, the body doesn't just ever use one or the other, it uses a combination, but if trained through diet or many years of endurance sports, it can end up using much more fat that carbs at a whole host of speeds.

After immersing myself in all of this for months I agree to some degree with a recent interview comment by Matt Fitzgerald (author of Racing Weight), saying he doesn't know many elite athletes who are religiously following paleo - as their (mostly) squeaky clean diets are already very low in refined carbohydrates, high in wholefoods, fruits and vegetables and most importantly, very controlled in volume.

But saying this, after personally experimenting with eating lower carb and higher 'good' fats - I'm talking olive and cold pressed oils, nut butters, olives, nuts and seeds, yoghurt, coconut etc - I have truly seen a difference in my energy levels in terms of escaping the peak/trough of a high carb diet, which I think can essentially encourage you to eat more than you need. It can take quite a bit of planning ahead (chia muffins are sometimes not on my to do list late on a Friday night after work and before a long back to back at the weekend) but when I've been disciplined about low carb fuelling I have really noticed a difference in energy and performance when out there training for hours.

And in any case there are a LOT of other benefits to this type of eating, not least lowering the body's insulin dependency and long-term risk factors for a number of diseases prevalent in the western world.

When trying to improve in ultra running, indulging in that old sea of yellow carbs is just not worth it.

My Fat Oxidisation and RER Test
So, connected to the above, Lesley also tested how my body currently burns fat by doing an RER test. This is the Respiratory Exchange Ratio response to the incremental tests on the treadmill. RER shows the body's use of carbohydrate or fat as the main fuel source. When resting levels of RER equal 0.7 this indicates fat metabolism is happening and whilst when RER values are greater than 1 this indicates a switch to carbohydrate as the main fuel source.

In my test, my RER reached 1 at 15km per hour, which amazingly showed that for all speeds under 15km per hour (i.e. obviously ALL of my training!) my metabolism is using predominantly fat already, and only switches to using carbs as the main fuel source at 15km per hr. This made me feel slighly foolish for having focused on paleo/low carb for training purposes for so long (despite the fact I feel its a super healthy diet anyway) as my body is already doing what I have been trying to train it to do. Lesley reckoned this would be largely as a result of 4 or 5 years of running, duathlon etc.

So I would seriously recommend getting metabolic testing if you are interested in this type of stuff, I found the whole process completely enlightening. Check out Napier University if so.

Slightly nervous about the May VO2max re-test already - no pressure to improve after all this talk of training plans and improvement!