Glen Ogle 33: ending on a high 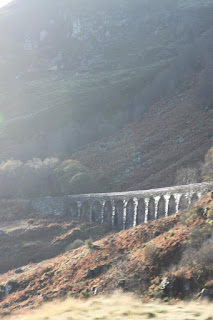 It would be difficult not to have a ball running this route. 33 miles of stunningly beautiful soft paths winding through an autumnal Glen Ogle in the Loch Lomond and Trossachs National Park, near the tiny town of Strathyre. 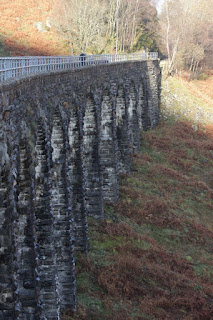 It didn't start well though. The race prep was a disaster. I couldnt sleep AT ALL the night before. James was out, I knew I had to be up at 5am and I must have turned over 65 times. Eventually the alarm went off and I struggled to get in gear and over to meet Karl and grab a lift with Carole Fortune, thinking all the while that I'd be too exhausted to out in a good effort.

But fortunately enough the adrenalin kicked in and the beautifully fresh air of the Trossachs helped me wake up. My muscles felt fine after last weekend and we concluded all the mud at Jedburgh had softened the impact. The start line had been changed from last year in a bid to lengthen the race to its promised 33 miles so we walked a wee while up the forest path to get to it, squeezing past cheery, surprised looking blokes in massive farm-type machinery. Then we were off, to face the first hill of a fair few in the first miles, which was a welcome way to control my early pace tendencies. To my surprise I felt great, enjoying the steady effort and the crisp freshness of the morning. It had been pouring with rain en route to Strathyre but had cleared to leave a gentle mist and scattering of hail and we were surrounded by the gorgeous snow capped hills.

I didn't really want to stop to walk on any of the hills but was forced into it on the main steep incline up to the old railway line above the road. At the top, the flat path that runs above the railway arches is just spectacular, with views down to Loch Earn and through the misty forest. I'd seen a few ladies I knew were fast on the start line so was expecting them to trot past at any moment, but it didn't happen until around mile 14, when Alison from Aberdeen drew up beside me. We chatted and ran together for a while and almost immediately Emma Baker appeared also before dropping back again. We continued that way for miles before Alison gained a few hundred metres. We headed through checkpoint 3 at mile 18 and I stopped for just seconds to grab some coke, half a bagel and a chia flapjack for later.

The route is roughly out and back, with the exception of extra miles added to the return to take you down sleepy Balqhuidder B roads after coming down from the hill instead of the path we'd headed out on from Strathyre. After checkpoint 3, we were back on the same beautiful railway path, and the sun was just beginning to emerge from behind the morning's snow clouds. I still felt strong but and incredibly free without my Garmin, with just the trusty OMM waist pack for company (it survived the mud of Jedburgh; unlike my white top). I knew I'd begin to tire soon so was just trying to keep the pace steady and run efficiently, concentrating on my stride and contact with the ground.

A few miles later Emma appeared again and passed me, she looked strong too and I did my best to stick behind her. We hit the downhill in what seemed like no time at all, which I think I hammered slightly too hard. After that I stuck my my iPod on for a diversion, the album reminding me of the elation of finishing Jedburgh. I recalled from last year that the last 6ish miles of road through Balquidder were really quite undulating and predictably this did drag on a bit again this year, but knowing they were coming, I tackled every hill with an 'I can take you on' attitude. Another reason why knowing the course helps so much - not just navigationally but as a mental motivator too.

And then all at once the shoogly bridge preceeding the finish line appeared, and the finish was right there with Ada's cheers and my go-much-faster friend Karl already getting changed.

Considering Jedburgh Three Peaks the week before was just 5 miles longer than Glen Ogle, at 38 miles, it could hardly have been a more different race experience in terms of terrain (did I mention Jedburgh was muddy?) and runnability. This goes to show in the results - my Jedburgh time was 7.16 and I finished Glen Ogle in 4.39 as third lady. I saw Emma Baker who'd finished second lady and she said she'd only been in for two minutes. Alison had run a belting final 10 miles and finished seven minutes ahead. Craig Reid won overall in 3.43. All in all I was delighted with my time given a few miles had been added on to the course this year to make it up to (almost) 33 miles. 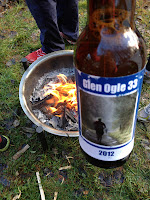 The marshalls were all incredible - great to see Lorna, Ada, John et al - and must have been freezing their a*ses off by the end of the afternoon, it was baltic! The fire they'd set up at the finish was amazing, and we huddled round it for a while drinking the GO33 beer like dutiful ultra runners. Congrats to all who ran, particularly Karl, Michael, Carole, Helen, Emma and Ian, who didn't have a good day out on the race but stayed around for hours to cheer folk on.

So, feeling great at the moment, I'm reluctant to admit defeat and not race again until the New Year, but the decision has been made for me (for Scottish ultras anyway) as I'm back on Mull the weekend of the Winter Ultra on 7th December.

My running energies instead will be focused on using the winter months to get in some speed work, get back into the gym to build core strength and plan an adventure to run half way down to Dad's in Cheshire for Christmas, leaving a day ahead of James. 2 out of the 3 wouldn't be too bad if I still can't face the gym claustrophobia....