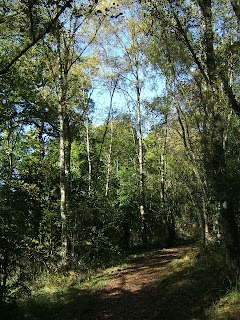 To much amusement this race presented a few risks, namely that I cover myself in cuts & bruises ahead of the wedding of the year in a few days time, probably not a good way to complete the bridesmaid styling. Minus a few minor fence-scaling scrapes, definitely concealable, I'm still in one piece. Plus ultra running is one fast way to get a good tan for an occasion (safely of course).

To cut to the chase I loved this race. Saturday was one of the rare days you thank unreliable British weather forecasting for being so, well, unreliable. The predicted torrential downpours didn't materialise save a few light showers at the start. The sun shone and for the most part we were shaded within beautiful woodland. 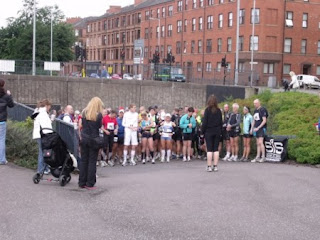 Around 140 runners assembled at the Partick start, in a WHW/Milngavie-esque tunnel. For some reason, like the monsoon, my usual pre-race nerves had taken leave. I knew I'd be running against a pretty strong field of experienced female ultra runners, but I think it made me somewhat calmer. I felt content with just doing my best, enjoying the run and seeking my own PB rather than trying for any more. And that would be easy, as bizarrely having only having raced a 33, 43 and 53 mile ultra before, a 40 was a first! We set off out along the Clyde past the SECC and a rather putrid-smelling sewage works. Running to music again was a joy with the shuffle being an improvement on the heavy i-touch. I did my best to slow it down to a controlled pace as per my race plan (scrawled the day before on the back of my work to-do list). I did a much better job of this than the Highland Fling, around 7.45's, slowing to 8 min miles approaching the first checkpoint at Cambuslang 10 miles in, and banking 1.5mins for later. Bryan Adams sang me into this one, what a superstar.

My stop strategy was, well, not to stop, so I quickly refilled and went straight through the bridge out towards a section of grassy trails. A welcome change from tarmac, though dangerous for the ankle which has been slightly misbehaving of late. This is where Race Director Lee's impressive route-marking came in helpful as I ended up running on my own for pretty much the next 6 or 7 miles, perfect. If the white arrows hadnt been marked I most definitely would've been off on a few navigational adventures, despite studying maps and race directions beforehand.

Section two was pretty uneventful: another 8 miles into second checkpoint of Strathclyde Park, where out in the open it was heating up. I forced a minute's stop to whip off my shoes and change socks (a vivid image in mind of the sparkly peep toes I must wear on Friday, I CANT lose any more nails out of the 7 left!) A lovely marshall even helped me with this unattractive task and sent me off out into hot expanse of the park clutching the contents of my drop bag, flapjack and banana.

And just around the corner 4 miles away came the navigational silliness. In a bid to make up a few minutes lost time from the last section I'd lifted the pace and neglected to keep looking at the arrows on the ground, missed one turning right and headed straight in (and round and round) a council estate before my instinct told me to retrace - not before I disturbed an elderly man in his garden to ask where the Clyde Walkway had gone. After re-tracing and around 8 mins lost I found a group of runners and knew that probably I'd lost the placing I had until then. Ah well just keep going and keep your calm. I then met a lovely ginger Australian who cheered me up and we chatted for a few mins through a pretty woodland trail. It was all ok.

The next stretch seemed to go on forever, as I'd expected checkpoint 3 to be at 28 miles but I'm convinced it didnt materialise until 30, or perhaps the Garmin was playing tricks on me again. A few miles previously I'd managed to finish all of the carb drink and the water bottles I was carrying and as if magic an Italian chap called Ricardo offered me some of his - the second time this has happened an I'd made a conscious effort to carry more this time but it was very welcome. He was perfect to run next to for a while, some friendly chat but not too much constant talk. He kept skidding everywhere - not quite sure how he was doing it but I'm still surprised he finished in an upright position!

The final checkpoint was again pretty uneventful - we refilled and I attempted to eat a Muller Rice without a spoon. Glad there are no photos of that. I couldnt stomach the Stoats so grabbed it and ran off behind the unsteady Italian. Attempted to eat the flapjack but for the first time in a race I was starting to feel quite sick so I threw it to the wildlife.

This would be the longest stretch of 12 miles (but I'm sure it was 10)with the most elevation of the entire route, around 150 metres. Not immense but tough in the final stretch, and it consisted mostly of slippery and wide wooden trail steps. I ran with the Italian and Aussie contingent and chatted about other ultras on the horizon. Then we came onto a blissful stretch of trail woodland and I took off slightly ahead, before realising I was completely on my own again. Thankfully you're never quite alone when you have some 80's geniuses on the ipod so I made use of them to take my mind off the final few miles. Before I knew it I popped out the woodland onto a pretty cobbled street winding down into the World Heritage village of New Lanark, with a welcoming but premature sight of the finish and spectators down below. The route then predictably veered away and up another hill to detour around the village and back onto the trails to make up the final mileage. The Garmin clocked 40 and 6 hours 17 as I finished. Seeing the girls in already I knew my place would be fourth.

Defending top ultra runner extraordinaire Lucy Colquhoun ran an impressive 5.18 to take first female, with Debbie Martin-Consani second in 5.56 and the third female 40 seconds ahead of me.

The men's/overall winner was Paul Raistrick, who broke 5 hrs with 4.44, Grant Jeans just behind with 4.53 (both illustrated beautifully below). 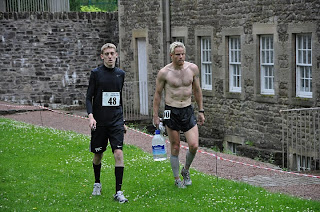 We recognised Paul - I think he once won the Mull Half Marathon amongst many other races of a variety of distances and sure I've seen him at the Seven Hills.

Finish was bliss. I found out the exception to not liking Bud is when you're handed one straight after running 40 miles, and that this goes extremely well with homemade tablet. Gregg came storming in shortly after 7 hours, a brilliant run by the man machine! The injuries held out and it seemed a really positive race atmosphere for everyone, with slick organisation and lovely marshalls.

Once again a few more pearls of ultra running wisdom have been banked from this race. Research and run the route beforehand, and know what to expect. Carry more water and carbs yet again. The scrawled race plan containing significantly more realistic targets that I've ever set for myself before definitely worked. I'm excited already about the next, the Speyside Way at the end of August - though ankle pains are warning me to stick off the running this week.
at July 19, 2011