Balloch to Clydebank Half Marathon

A scene familiar to this winter awaited in my garden on Saturday morning, a slushy carpet of snow. With it came the possibility of race #2 of the year being cancelled, with an update from trusty reporter in the west Mr Wallace advising it was falling thick and fast over in Glasgow. A frustrating setback following the already frustrating start to the year, however scatterings of snow in Scotland pale into insignificance compared with recent events in Japan, so I complain not.

In any case the organisers took a hardy view, and snowy conditions turned to rain, so I decided to make the dreich potholed drive to Glasgow in prep for the the morning. Thanks to Allan for a perfect pre-race feast, not to mention being the Racing Knowledge :-)

9 am: around 400 runners are pretty much huddled at the start in drenching rain, keen to get going to get warm. The first few hundred metres followed the pothole theme as the road was in bits out of Balloch, but soon cleared as we got to the main road. I warmed into the race quicker than expected despite not following usual pacing advice again (far too much energy to get rid of!) and ran the first few miles at 6.20/m pace. The route was quite a dream after Lasswade last weekend - largely flat road with slight undulations 2/3 in, as well as a welcome stretch of sheltered path. I ran quite flat out for the first 3-4 miles then slowed and attempted to stick at 7 min miles.

This week I had the sense to charge the Garmin prior to race, and tried to strike a balance of not getting obsessed with constantly checking speed on it thus stressing myself, but using it to keep myself on target. Not sure I got it right on this occasion but a work in progress. The speeds showing can sometimes fluctuate quite wildly so there's a danger of over compensation by checking it and constantly altering speed constantly - i.e. if you aren't on track with 7 min miles and speed up you can end up going too fast and tiring yourself before slowing even more than you were previously.

The rain grew heavier at one stage of the race to the point of slight discomfort but improved again as we were nearing the end. As ever the last two miles stretched for what seemed some time..not the time to get chatting as I did with a guy just heading into the final mile, asking me if I was trying for under 1.30. I was, but didn't quite make it (Garmin 1:30:57/results 1:31:05/tenth female). Ah well - that was the best effort I could put out that day - and I finished feeling really good, and a little closer to being back on track.

An impressive field of runners were doing their thing today - including winning male Michael Deason of Glasgow Uni at 1:08, winning female Charlotte Wilson from Garscube Harriers at an amazing 1:24, and Allan at 1:25, fantastic effort.

A fantastically organised, friendly and good value race to try.... 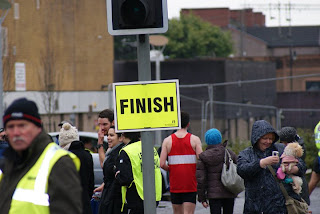