It's been a full on few weeks since the Fling. My bruised and battered ankle, despite it's elephantitis appearance at first, healed up quickly and I was able to resume training within 10 days and break back into the final 'peak' month of the training plan. The weekends looked like this:

Hills of Edinburgh
First weekend back into it was actually a sneaky getaway in Paris, which featured a few leisurely runs around Luxemburg Gardens to test the ankle - in which I was regularly overtaken by groups of fit-looking  pensioners - but training that was not. I got back with the programme in Edinburgh a few days later with some hill repeats, specifically a couple of predictably-painful sessions from the lawns of Holyrood Palace up the steepest paths to the top of Arthur's Seat to trash the quads running back down - repetitive but effective. I then ran another 7 Hills of Edinburgh route where I managed to go off piste and get lost in some residential streets, after running that same route, hmm 10 times? Note to self to stay present in all training runs and particularly races. Towards the end of these sessions, which lasted not longer than 3 hours, the foot had started to complain - but thankfully now 4 weeks later I've had no more pain at all.

West Highland Way
The late May bank holiday weekend offered an excellent opportunity for my longest back-to-back effort, which I really felt I needed both mentally and physically for the Western States, after not feeling my back-to-backs for the West Highland Way last year were specific enough. It was great to be joined by a few folk for the two day run - Fionna, David, Lorna and Bob, then Noanie and Kirsty for the second day. We ran 72 miles in total over the weekend, starting in Milngavie on Saturday and running to Beinglas in what felt like blistering heat (but was probably 20 degrees...), a bonus for the heat training but not so good in terms of picking up some comedy sunburn. Least they'll be able to spot the Scot at the States. I was pretty tired from a bad night's sleep the night before but on the whole the day went great, helped along considerably by regular coke and crisps breaks in our need for salt and sugar. Yes, the wholefoods, low carb training fuel plan went out the
window in the heat - but again this was a great learning experience for the WS. Salty snacks will be king. After Inversnaid we were all getting a bit fatigued and looking forward to finishing - Fionna had kindly parked at the Drovers Inn to ferry us back to Tyndrum after, but few miles short of Beinglas I fell flat on my face on one of the wooden board walks and split my knee. After a quick dip in a burn to clean it up we kept moving and picked up the pace to arrive at the Drovers for some much-needed food...a recurring theme of the weekend.

Sunday we ran 30 miles from Tyndrum to Ba Bridge on Rannoch Moor and back, rather than running to Fort William, which I felt would be overkill in terms of mileage. I was tired and a bit irritated with my knee, which was slightly messy. But after dressing it up we got underway and after 5km or so got into the stride. Then water from the bladder of my UltrAspire pack started pouring down my back and I had this mechanical for about half an hour before I decided to ditch the water completely. Partly my fault for forgetting the correct fastening for it but I couldn't be doing with the leakage so managed by refilling a bottle of water from the Bridge of Orchy Hotel for the reat of the day. For WS I will definitely be using a double bottle pack. 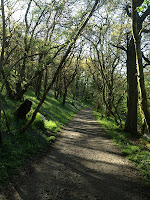 Running in a group kept things lively and resulted in a faster pace than I'd have run alone, hills in particular! There weren't many over the entire weekend that we didn't run, including the one just after Bridge of Orchy, Murdo's Mount. Trying to keep up with hill running demons Bob and Fionna was brilliant and fair enough I might not be running those steep canyons in the actual race but I could literally feel the benefits of conditioning afterwards, despite the fact my legs remained pretty trashed running up any incline for over a week. The sun also shone beautifully all day on Saturday and the West Highland Way was just spectactular, alive with bluebells and birds (mainly spotted by Lorna!)


Glenshee and the Cateran Trail
The weekend after I stayed with friends up in Glenshee, Highland Perthshire, in a cosy little yurt on an ecocamp farm. I wanted to get a last, shorter back-to-back in to continue with my leg trashing mission before the taper. Fionna kindly drove up to be my partner in crime again (and make me run more hills). On Saturday I'd hoped for about 25 hilly miles but it ended up just 16. A lesson learnt that its not all about mileage but running off feel sometimes - and I felt absolutely exhausted. Legs had nothing left to give. Hard efforts from the weekend before combined with a VO2max re-test during the week which saw me running to exhaustion on the treadmill had just about finished me off.  Still, we headed up Mount Blair right opposite the campsite, one of the largest non-Munros in the area, and ran most of the hill before a fast-hike to summit. We ran down the other side and back up to the summit again before picking up the path back down the same way towards the camp. No longer were the words 'This is a fantastic path to run' were out of my mouth than I was faceplanting into the dirt and cracked the same knee wound open once again, this time complete with a heap fo dirt inside the wound. Yuck. I took poor Fionna down behind me too, who also had a bit of a scrape. After a quick clean up we decided to head straight back to camp to sort it properly before heading to the Cateran Trail as planned. Soon we realised the path we'd taken was not the same route we'd ascended with and next followed a half-hour skin-scratching hike through knee deep heather, finding ourselves completely disorientated before ending up in a farming field, too near to cows for comfort but back near where we started out. Phew - maps next time then!

Later on with knee strapped up we bagged another 10 or so miles on the nearby Cateran Trail, heading backwards along the race route from the Spittal to tackle the long hill. I had even less energy and power than the morning and it was bloody hard work. A total of 16 miles that took 3.5 hours, but a good, tough-it-out adventure, and great to run on the Cateran Trail at last.

The last few weeks have felt like treading a very fine line between training at my peak to make sure I am ready to run 100 miles but without getting injured, overtrained or too fatigued - an interesting learning curve in what I can push to in terms of weekly training.

So the taper begins at the end of next week, after two final long sessions in the heat chamber, and between now and 19th I'll be on a manic mission to sort out the rest of the logistics for the trip, the race and the 10 days after that I'll be in Chicago and New York for work. Lets just hope I can still walk when I have to go into meetings!

A final huge thank you to Likeys for sponsoring some of my sunshine kit for the States, and also to Buff UK, who have provided some clothing and a fabulous selection of Buffs for my year of racing. I will be excitedly greeting Mr Postie this week :-)