If Carlsberg did Ultras...

After all the obsessive planning and scheduling involved in Western States training, I reverted to impulsive form a couple of weeks back when Mark Cooper mentioned he was due to run the Endurance Life Northumbria Ultra soon, one of their Coastal Trail Series. I took a look at their website, which to a backdrop of stunning images of sandy beaches and sunshine read '98% full'. Too tempting. Having nothing on that weekend apart from a 30 mile training run - this race would end up being 34 miles - I signed up there and then. I'd never been to Northumbria - not counting East Coast Mainline - so wanted to explore there anyway.

It all serendipitously came together when my friend Julie decided to join me to explore Holy Island and the general surrounds. She even managed to get us a cottage for the whole weekend, courtesy of her kind friend from the area, so we headed down to the little fishing village called Craster on Friday night to settle in. We arrived to a night sky awash with stars and a house already cosy with the coal fire left on for us. Happy Friday indeed.

And so the next morning we drove the 13 miles back up the coast to race registration in Bamburgh. And what a registration location - without a doubt the most stunning one I've seen to date - Bamburgh Castle, which was bathed in glowing morning light from the sun which had just risen. I had all of 10 minutes to register, grab my timing chip and do some general faffing and photo taking before hopping on the bus that would take us out to the start, inland in a town called Alnwick. It was great to catch up with Mark and his friend Tony Holland on the bus and hear about their plans for the year...Tony is taking on the West Highland Way Race and the Lakeland too - exciting stuff. 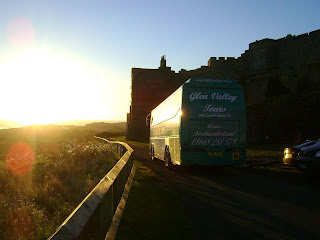 After a pretty comprehensive briefing from Endurance Life, including words on respect for the environment and a challenge to pick up at least one piece of litter, we set off across a series of fields and paths. After a wrong turn for 100 metres or so taken by the entire field of around 70, we got back on track that would take us 6 or 7 miles out to the coast. The rest of the course was brilliantly well marked with the consistent branding of Endurance Life and getting on to the coastal path at Alnmouth was just lovely, with the expanse of blue sky and sea all around us and soft sandy paths weaving through the dune system. I hit the first check point at 6.7 miles in 1.02 hrs and stopped only to tear my jacket off and stuff it into my hydration pack - the UltrAspire Surge, which I have completely fallen for. Its so lightweight I hardly notice it and has zero bounce and fantastic little fuel pockets.

The route travelled up the coastal path for 20 miles, threading through little villages and towns - first Boulmer then Howick, Craster, Beadnell, Newton, Seahouses and Bamburgh. As per the typical Endurance Life event there were a number of races being held, a 10k, half marathon, marathon and the ultra. The marathon was setting off from where we did shortly after, and later on the fastest runners would begin to overtake us.

At around mile 12 the Norwegian girl who'd been behind me caught up and we chatted for a while before she sped off. I had to remind myself more than once to run my own race and of my promise to Julie that this would be a training run only.

I tried to keep my pace steady and didn't stop at any of the other checkpoints apart from the check the timing chip in and grab a handful of sweets:

I was just enjoying the peace, soaking up the sun and scenery, and was on my own for much of the remainder, apart from around mile 20 when I passed Tony. He was struggling with gastro problems, mentioning a 65 mile treadmill run he'd done for charity last weekend might have been too much!  I also ran past a few other guys when we made it down onto the beach at Beadnell. One was one of the 'Vegan Runners' crew and mentioned I was moving into sixth place overall. The beach sections between paths were free and so much fun, apart from the seemingly endless final beach section into Bamburgh, where the marathon runners started passing us and heading up to the castle for the finish. Us ultra runners had to veer right round the castle instead for the final 8 mile loop, north around the paths and roads of Bamburgh to return to the same beach section and finish. Just as we started the final section I was passed again by another girl - who turned out to be the sister of the Norwegian girl in second place. Then all of a sudden Julie appears cheering in the dunes - a welcome support and encourgement not to slow and lose focus.

I found some energy from a Trek bar and pushed on, overtaking the girl again once we were round the side of the castle and heading up a hilly road. I thought she would follow in suit but she stayed back. I headed into another field section, where for the only time during the race the signage seemed to disappear. I did a few 180's until I spotted signage on the main road over the wall and promptly hopped over to get back on track. The tarmac went on and on - and every time I expected the signage to turn us logically back toward the castle we were sent off in the opposite direction, with the sun now beating down on us unrelentingly. Finally, after another field section the beach appeared again, and all of a sudden I was running the same stretch down towards the castle - a bit groundhog day but not exactly uninspiring scenery to be stuck with!

After the final cheeky little hill up to the castle finish line I was done, in 5.31. And pretty dehydrated given I hadn't refilled my hydration pack for the entire race. I was only over the finish line for 2 seconds when the Endurance Life team handed me a print out of my splits - who needs a Garmin! We were all confused about placing - the team included - as the first Norwegian girl had done a disappearing act and the second wasn't in yet either, so it turned out I'd come second female, and third overall, despite my print out stating eighth overall. The ladies came in 10 minutes after and it transpired the first had not taken the final turn off up the hill to the castle finish and continued running along the beach. Quite a few of the guys running had also decided to call it a day for one reason or another at marathon distance, which the organisers had spelled out would be possible and a finishing time still given. Chris Jackson won in 5.05 with Lizzie Wraith close at his heels, first female and second overall in 5.07. There ended up being 4 ladies in the top 5.

So what else can I say - spectacular route, professional and seamless race directing, brilliantly marked course, sunshine, seascapes and later in the weekend, sticky toffee pudding. Julie and I even managed a lovely recovery run the next day alond the Craster section of the route, to soak up more of the scenery and surroundings whilst we could.

The only slight (but barely there) negative would be the focus Endurance Life placed on essential kit all runners had to carry - for the ultra this included foil blanket, first aid kit, whistle, jacket etc, all of which would be spot checked and were available to buy at their shop at registration if runners didn't have them. I can understand this for a true wilderness trail race but I'm not sure it was warranted for the coastal path, which led us through villages/towns every few miles.

And now the rain has returned but at least I have the first heat training session at Napier to look forward to tomorrow. Happy running days.
at March 07, 2013