The Fling and the Final Countdown

Is it really nearing the end of May? The sand timer of the Scottish summer is swiftly running towards midsummer, which for me and around 200 other ultra runners in Scotland means one thing only, that the biggie West Highland Way Race is just a month away.

Four weeks ago, I ran the Highland Fling Ultra for the second year. This year, running the Fling was about getting the distance in for the WHW Race, and covering the southern half of the course as a training run but improving my time from last year. Wait - don't those two aims conflict? Its no wonder I was so disappointed with myself after this race. I ran a time 9 mins slower than last year (10.43) and didn't finish feeling like I was capable of continuing for another 42 miles as will be my goal in June. With retrospect I am now giving myself a break as I realise it was over ambitious to run a fast Highland Fling just 3 weeks after the 133 miles of Mull.

I set off strong and steady, after James expertly delivered us to Milngavie from Edinburgh with the time to spare I'd been hoping for. The prep was relaxed compared to my usual panic stations and the females and senior males set off in the 6am start from under the bridge. My main aim for the first (flat) 12.6 miles to Drymen was to run slower and steadier than last year and conserve more vital energy for the many hills, undulations and challenging terrain of later. Last year I'd torn off behind Kate jenkins for a while before consciously slowing myself but still made it to Drymen in 1.40 or so. This year I was pleased with getting there in 1.54.

It made a massive difference knowing in more detail what to expect of the route. Last year I'd hardly been on the trail. So I was prepared to speed hike Conic Hill just before the first checkpoint of Balmaha at 19 miles. The clear, sunny conditions gave stunning visibility over the loch below and chatting to folk around me whiled away the climb. On the more challenging downhill into Balmaha (see photo on right), my race unravelled slightly when I tripped and face planted hard on the ground, bashing my knee and painfully jamming my feet into the front of my shoes. 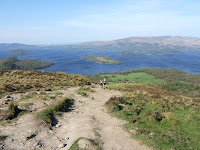 I dusted myself off, a bit shaken, and continued with the descent but felt slower and aware of my aching toes. Another runner, Karen Robertson, tripped and broke her ankle on this downhill section, which must have been a difficult blow to her plans - hhopefully her recovery will be swift.

At Balmaha checkpoint I made the most sensible decision of the race and took one of my two pairs of socks off - instantly my toes had more room and could breathe again. Doubling up doesnt make sense with steep downhills and I wont be doing that in the WHH Race. After a re-fill and attempting to ingest a bag of mashed sweet potato I left for the loch.

I'd run the Balmaha to Rowardennan stage twice in training and felt good about it, myself and a few girls were tag teaming and catching up with each other and it was good to chat to a few. It went without a glitch and I arrived into the Rowardennan checkpoint(27.2 miles) at 4.54. Stopping for a scant minute to pick up a Stoats bar and have a coke (first ever race with coke - its incredible!) I kept going for the tough and scrambly lochside section. I knew exactly what to expect and yes there were the obligatory trips and twists but I think I swore less than last year - this is progress!

I reached the penultimate checkpoint at the stunning Inversnaid and felt like I was running a lone race, with hardly any runners in front or behind. Once again, I re-filled and shot straight through, with my Garmin warning me I was off track for a 10.30 finish. My hopes were pinned on getting to Bein Glas with 2.5 hours to tackle the final 12 mile stretch, but this wasn't to be. I was running all the flats and walking/hopping over the stones and boulders where need be, but I just couldn't get my base speed up.

Coming into Bein Glas I was thankful for being in a better state than last year, with my torn feet, low blood sugar and state of bodily shock at the heatwave! I felt tired but stronger, and stopped for just a minute to grab the mars bar, jelly babies and banana which would fuel me for the final section. I felt buoyed by a guy running past me on the way out with cheerful words of encouragement, telling me how strong I looked. I asked him when he started the race and he replied 8am - so he was 2 hours ahead of me and I hope he realised just how amazingly strong he was going himself, both mentally and physically. With this inspiration I zipped my (wo)man suit up and set off in a jog. This last 12 miles is still fairly punishing, there are some short and sharp hills and plenty more undulations to struggle with. Around the same time, the shin I'd hurt running for 3 days on the tarmac around Mull began complaining, with shooting pains up the right outer side as I put my foot down heavily or tackled a downhill. This in turn didnt help my mental stamina and I knew I wouldn't make it to Tyndrum with a 10.30 time. But when I entered the final approach and heard the piper, I was surprised to check my time of 10.43 and tried to remind myself this isn't too far off, but my leg was giving me some real pain now.

James met me at the finish, and at once it was over for another year (or two months). It was great to see some friendly faces - John Duncan, Lorna, Donnie and Colin etc - and John and his marshalls did an incredible job of organising the race and providing as much support as possible to us runners.

I do still feel perplexed about why it didn't go better for me given the fly-through strategy at checkpoints and how much I pushed myself to run all the flatter ground and gentler hills. I wish it was possible to pinpoint to one factor, but life isn't like that! I'll settle for a mix of still-fatigued legs from Mull, lack of speed training this year in favour of long & slow and the shin niggles that returned with a vengance. Its definitely informed the training I'm focusing on during these last peak weeks, and this is indeed a positive.

West Highland Way Training
So since the Fling and subsequent week of recovery, I've been back in peak training mode, with my rough weekly schedule consisting of one or two tough hill work sessions of an hour plus, an interval treadmill session, a core gym session and long back to back weekend runs on Friday and Saturday. With the recent downpours I've yet again been thanking the heavens which keep opening up for my OMM waterproof - its consistently done the job, even in near-monsoon conditions last weekend in the pentlands. A couple of weekends ago I ran 4 hours on the black mountain bike route at Glentress in the borders - which turned into a bit of a hairy night run with the hill running fiend Andy. We'd left from work in Edinburgh to drive down on Friday eve but I'd forgotten my head torch, leaving us with just one to share. We reckoned we'd be finished by dark but unfortunately ended up running the last hour of the route in the darkness with his torch battery failing and mountains of mud to content with on the downhills. Another lesson learnt. The morning after I ran a 2 hour hill run in better conditions, and felt good afterwards, with the Fling/Mull niggles behaving themselves nicely.

This past weekend was my peak training weekend, and consisted of a 4 hour evening run in the Pentlands on Friday night, then a 30 mile/6 hour run on the West Highland Way (Tyndrum to Glencoe and back) on Saturday with Antonia, who's also training for the WHW and will be the youngest runner! 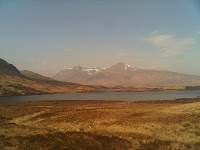 This was a fantastic, confidence-boosting run for me, on the only section of the WHW I hadn't yet trained on. This section north from Tyndrum now gives me something to look forward to after the tough undulations of the first 53 miles - there are plentiful runnable sections and an absolutely stunning backdrop - clusters of snow-tipped munros which fringe the wilds of Rannoch Moor.

So now to my easy week - a break in Amsterdam for a friend's wedding, possibly with 3 or 4 easy runs around the Vondelpark. Bliss!