Mid-January emerged, signalling time for the first en masse West Highland Way training weekend, and the need for me to end my season of comfort. I didn't stop training over the festivities - running on Christmas day and throughout - but I did get very adept at sticking to slow and easy pace and flat routes, and carrying seamlessly on with the festivities post-run.

I'm glad I didn't check the forecast before the Friday night as wouldn't have been particularly encouraged by it. Gregg and I arrived in Balmaha - a wee town at the foot of Conic Hill on the West Highland Way, and 30 miles from Glasgow - amid torrents of rain. Fortunately the cosy log fire in Oak Tree Inn lulled us into a sense of security until later that night...when I was woken multiple times by the driving rain and howling gale force winds.

Morning came and the storm persisted. I was unsure if the WHW guys would want to go ahead (what was I thinking? They run 95 hilly miles in all conditions, in typically 24 hours or less. They love it). I had also decided to join Karl Zeiner for an 8 mile run prior to the 30 mile training run, to celebrate his 38th birthday, so we were due to run a 4 out 4 back route and meet the others in time for the 10am start of the 30 miler. 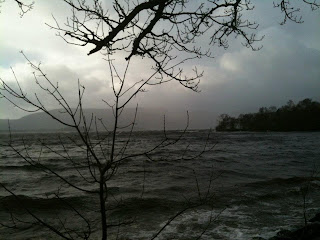 I thought this would push my limits in order to get the ultra training proper underway for the year. It was hardly raining when we left but the wind was relentless - I heard 60 mph gusts mentioned later on - and the trail was super muddy, causing me to manhandle a barbed wire fence in mile 2 to stop myself falling and gashing the palm of my hand in the process, thankfully not deeply. On the way back to the Inn the heavens opened and it was wild. Loch Lomond looked like the North Sea - the conditions were actually beautiful in an extreme, elemental kind of way. Although I could only see through my soaked, matted hair, which was whipping me in the face in the absence of the hat I'd forgotten.

After picking Gregg up back at the Inn and a 2 minute stop to grab supplies, we set out at the back of the WHW runner pack, having missed the briefing and most of the plans. Again, the weather calmed and the first 5 or 6 miles were enjoyable. By mile 10 (mile 18 in total for me) I started to feel a bit spent, just as we hit the gradual, relentless hill out from Rowardennan. I remembered clearly the length of this incline from the Highland Fling race last May, which comes around 29 miles into the race, and recalling how difficult I found the race last year didn't fill me with confident energy on this run.

So G and I reached consensus to give it a few more miles and turn round to head back to camp (repeating the logfire mantra), meaning the run (for me) would be in total 30 miles, and 22 for G who'd trained much less than me throughout winter and was trying to ease his distance in in prep for Run Around Mull in April.

A brief walking break and a Stoats wonder bar set us up for the road home, which was, well, wild. The wind whistled towards us this time, and was decidedly chilling, even when sustaining 8.5 min miles. We passed a figure walking briskly into the wind, hunched over his walking poles. Up ahead we were asked by a guy standing next to his camper if we'd seen a walker on the trail behind, and it transpired he was the support vehicle for this guy walking John O' Groats to Lands End. This guy was stoicly walking all day straight through the storm. I felt grateful to be running rather than walking, getting the task done with quicker - though I'll need to get used to slower paced runs/walking for The Big One in June. After all my mate Andy Cole - who attempted it last year - advised I should see it as a run only to Bridge of Orchy. Technically if you make it in a reasonable time you can briskly walk the rest from there. Although I don't want to have to do this, its a comforting thought.

Back at the Oak Tree, the roaring fire, hot grub and Irish coffees sorted us out, but the caffeine did nothing to stop me dreaming of bed by 10pm. I'm working on the distance training but seriously need to work on the distance with sleep deprivation thing...

I'd wanted to get my legs used to running tired, so on Sunday we headed our for another 7 miles, northwards again along the now-beaten path. G regretted the preparatory fry up but the weather was a lot clearer, and I felt decidely better than I had done the previous afternoon. 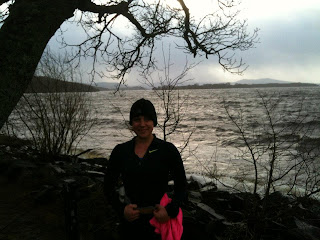 Though the wind was still fierce and the trail made for a sticky mudbath, sun beams reflected off the loch, soaking up the biting chill of the previous day and illuminating the hills behind. Today I was really enjoying the soft trails underfoot as a change from Edinburgh roads.

Wrapping up the weekend, I still felt frustrated to find day one so tough, but why would it be easy in mid-January amid gale force winds? Is it ever going to be easy? I think the challenge and excitement of taking on a run like the WHW is deeply engrained in its grade of raw difficulty, and that's what I need to remember - and welcome - when it comes to training and racing on the trail. 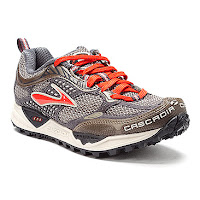 All in all, it really started tuning my mind to what needs to be done before June, specifically on West Highland type terrain. And the new experiment with Brooks Cascadia trail shoes proved successful, for that run anyway. Not a blister in sight...

Thanks to WHW Race Director Ian Beattie for organising (and enthusing) us all.
at March 11, 2012