Actually 10 days after the event I've bounced back and ready to rock again but I certainly was in a destroyed state after this final race effort - the River Ayr Way ultra on 24th September.

The last race in the Scottish Ultra Marathon Series (SUMS), RAW is a 44 mile walking route from source (the loch in the tiny village of Glenbuck) to sea in Ayr. New to me, this one has been going for a few years now and this year the distance was reduced to under 41 for a stadium finish in Dam Park. 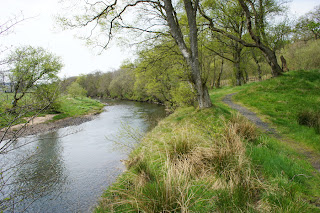 It never seemed a bright idea to do this race. I'd already run my required 4 out of the 9 SUMS and would be fresh back from 200 miles in the US. But as usual I changed my mind and thought it might be a nice way to finish the season and secure my third overall place in the Series, plus I wanted to see how I felt after TransCon. I could have either been in my best form due to the number of miles and elevation run recently, or worst due to recovery. I'd arrived back to the UK the weekend before and developed a very strange sickness lurgy that I think might've been jetlag - so left the decision up to the last minute.

Promising myself I'd stop the race if I really needed to I set off from Edinburgh to Ayr at the ungodly hour of 5.30am to get to Ayr. A bus deposited us at Glenbuck late for the start so there was just time to sprint to the woods for toilet breaks with 20 others (stopped caring by now)before a few words of briefing. I set off laughing after a start consisting of the marshall shouting 'GO' - reminding me of the 10 mile race Gregg and I ran in Ballater with a similar low key beginning.

Karl Zeiner was running and I knew I'd likely be able to keep him in my sights for 5 or 10 miles or so. Was glad to keep him amused with the cobbled-together race plan I decided on 20 mins before start - 8min miles for 20 then 9 min miles for 20. In reality I just wanted to finish as my body was physically fairly exhausted, more with recent lack of sleep than anything else.

Pace was fine if a little fast over the first 5 miles (did not stick to that 8 min mile thing!) but conditions surprisingly tough. I knew there wasn't much elevation in the route and in fact that we dropped 200metres from Glenbuck to sea level at Ayr - but sadly we were into the wind the whole route. Plus rainfall had apparently been high over the few weeks previous, transforming the race literally into a bogtrot in parts. I think from mile 4 I had wet feet which has shown to be a disaster for me in terms of blister issues. Quickly got used to this though, as well as having to run through patches of nettles encroaching the path - they were everywhere - my vest and capris not appropriate! My running style evolved into some kind of dancing trot as I held my arms above my head to avoid stings and skipped around the bogs, before manning up and just running gritted teeth through it all at full throttle.

Scenery was beautiful at times, with the fast-flowing river, overgrown path and neighbouring woodlands. I kept checking the direction of the river just to check it was flowing in the right direction - yes, I could make that mistake!

From mile 12 I was in discomfort and felt significant lack of power in my muscles, any slight incline was a struggle and my old glute injury was niggling. Very close to throwing the towel in from mile 23, once again this season I was saved by the Mars bar and lovely marshalls at the 27 mile checkpoint.

A few of the race signs had blown down here and there but fortunately I always found myself back on track on the river, though later found my Australian friend Peter - whom I've bumped into during the last three ultras - wasn't so lucky. The nagivational lanyards we'd been given - a first for me in a race - were fantastic to have on hand as reference.

Marshalls kept encouraging me that I was in first female position which spurred me to finish, I'm not sure I would have done otherwise despite having a much stronger second half of race than the first 20 miles. I ran into Dam Head at 6 hours 27 mins, most probably a sight to behold covered in mud and nettlestings.

Karl had finished earlier having run an incredible race in 6.12. Second and third women were Justine Eveleigh at 6.41 and Elaine Calder with 6.54. First overall, as last year, was Grant Jeans with 5.24.

(FYI Karl your running/walking race plan is a clear winner - it worked beautifully - may I adopt it?!)

After seriously long showers we met up with the lovely Sally who'd come from Edinburgh as my prizegiving plus one, before heading over the road for a pint, a pizza and ceremony. Weird to see people you've seen all year in race gear dressed normally! 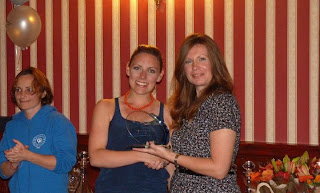 Here are the final SUMS results for men and women. Brilliantly well done to all who ran especially Frank Skachill who attempted and finished ALL 9 ultra marathons, including the full West Highland Way Race (winning him a unique prize at the prizegiving)! I hope he is having a thorough rest now. Not to mention a visually-impaired woman who ran RAW with a guide, achieving a strong finish. Proof that anyone can take on these challenges with the right prep. And sometimes without!
http://www.sumschampionship.org/
at October 05, 2011