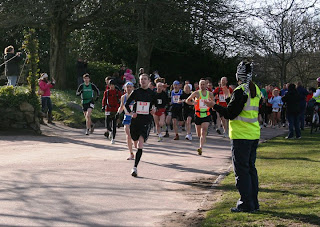 The first race of the 2011 Scottish Ultra Marathon Championships, the D33, had sounded an attractive race to me, following a mostly flat route out of Aberdeen's Duthie Park and 16.5 miles along the Deeside Way to Banchory before back to Aberdeen again. A no frills race costing only £12, I love the small-scale, local aspect, and find the out and back race route reassuring and measurable.

The day before the race I was ridiculously excited about running it, my first official ultra. Myself and a friend (with fantastic support team of friends cycling) have run the route before - 42 miles from Aberdeen to Ballater last summer as a foray into ultra distance following a few marathons. Despite being in constant rain, I absolutely loved running it and felt as though I could keep going when we completed with a sprint finish.

So I have read lots about how expertise at ultra's is built up over many races and years, and really saw this confirmed at first hand on Saturday's race- it's encouraging to know if women stick at it they're likely to keep improving with age rather than the opposite. So I was viewing the D33 as an exploratory race to learn how to better prepare for the Highland Fling at the end of April. I certainly learnt a few things about preparation, mental attitude and kit.

The weather was cracking. Beautiful sunshine with not a cloud in the sky. Having stayed at brother Rich's in Kingswells the night before, fellow runner and friend Gregg and I set out for the race start at Duthie Park in Aberdeen, somewhat late in the day, arriving just 20 mins before the race start. Lesson #1 - give yourself plenty of time to get out there, and check and double kit both before you leave the house and when about to start. I left my gloves at Rich's which was a bother as it was a pretty chilly morning, it always makes me feel comforted to start a race in the cold seasons with gloves on, even though they come off after a few miles.

The first 6 miles are an easy and pretty path heading straight out of the Park, and I set off in a second pack of runners from the start, with Lucy Colquhoun up ahead (and Grant Jeans sprinting right ahead of all - he would later win the D33 for the second time setting a record of 3.29). I was holding 7.30's for a while before thinking I should slow it down - got chatting to a guy who was giving me advice its better to keep it absolutely steady and focus on the way back rather than the way in - he was aiming to arrive in Banchory after 2.05 hrs. I silently aimed to join him.

Just ahead of the quarter way checkpoint at mile 8, a runner commented my backpack was swinging quite a bit. This confirmed to me I'd got the kit wrong - for a start I was carrying a heavy water bottle and food which I could feel on my shoulders the more I thought about it. Having never run the race before, I hadn't realised there would be three water stations along the way so carried quite a lot. I made the impulse decision to drink as much as I could then drop it at the checkpoint and wait until Banchory for more, then again wait until three quarters checkpoint to drink again. This was fine, I dropped the water and some food and felt instantly so much lighter. I also discovered the bacon sandwich Gregg had made me (in our attempt to swap the sugar overload gels and mainstream running fuel for more substantial real food) had come out of its tinfoil and pretty much managed to liquidise itself in the bag. This bothered me way more than it should have done, obsessive cleanliness made me want to clean it out there and then!!

I think for the Highland Fling I will forego the backpack completely, in favour of a lighter, smaller running pouch. In any case I was fine until Banchory for water and food. A few miles away from turnaround, the leaders began passing, first Grant Jeans (lightning), then later Lucy passed, smiling cheerily - one amazing woman!

At Banchory I dealt with the bag, and managed some beautiful homemade quiche from the marshalls, with a few cups of water. A few minutes and I set off again, and not far down the trail passed Gregg on his way in, running strongly, chatting and shouting encouraging things. The next few miles were surprisingly strong, with my energy levels picked up from the fuel stop, running at 7.45/m. I knew I was placing third female at that time as a runner had shouted it at me as he came in to the checkpoint as I was leaving, but 3 or 4 miles I developed a raging thirst, thinking maybe more water had been needed at Banchory, and I was now carrying none. I had another 4 miles to go to the next checkpoint and it was a seriously tough stretch for me, including pretty much the only hill in the race right ahead of the checkpoint. I arrived there feeling slightly dizzy and not at all right, and had to drink for quite some time - electrolytes and water - before I felt I could get going again. I really hadn't accounted for being in the sun for so much of the race. It was only a minute or so at the checkpoint but in that time the fourth placed female Claire Imrie passed me and took third position. I set off thinking I have to stay mentally strong and just run my own race, I was well on track to maintain my target finish time of under 4.40.

It took a few more miles to feel restored following my brush with deydration but running into Petercoulter I felt slightly better, for only a period of another few miles though. After this it just became painful to maintain the same speed, and I was doing 8.45's slowing to 9 min miles. Sensing another girl behind me I picked it up again and was running 8.20's and dug in until 3 miles or so out of Duthie Park, where she passed me, a brilliantly strong pace which I couldn't compete with. As ever the last few miles were a mental battle where I tried to clear my head and not focus on the sun beating down on the path - I focused my mind on reaching a different tree every few hundred metres and staying below 9 min miles.

Running into Duthie Park should have been a fantastic feeling, as I knew I had a hundred or so metres of downhill to the finish line, but I was seriously thirsty again and not particularly compos mentis. I crossed the line in 4.38, a relief to exceed the target. I was apparently babbling to Rich and Kirsty for a while about the bacon sandwich issue, and was starting to realise the extent of my shredded feet. Not sure if this was due to running through water a few times early on, or if its time for new shoes. In any case they are quite some state and will take a bit of recovery.

Gregg finished in 5.16, seriously impressive achievement for having done little training of late! He'd met another runner before Banchory and they'd run and chatted a lot of the way round which summed up the community feel to the race, although he had second thoughts later on about how they'd crossed the finish line holding hands and whooping - fearing he might end up on the internet in this pose! I think there is a lovely sense of collective encouragement in these type of races which you might not get in the larger more mainstream runs in Scotland today - most runners I passed or who passed me said hello or chatted. Lucy of course finished first female with a time of 4.05, Jamie Aarons in second with 4.24 and Claire Imrie with 4.35. The race organisation and marshalling was also faultless and friendly, particularly the post-race Brewdog. 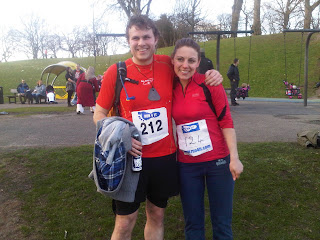 So I'm taking away the determination to control my mental expectations for the Highland Fling - and expect it to be painful and uncomfortable, not an elated adventure as I'd found the 42-mile Ballater run (we didn't do this at race pace so undoubtably the D33 would be tougher). Ultra running isn't supposed to be wholly easy or pleasant (10% exciting/90% slog as David Bedford warned) and I have to remember therein lies the challenge.

I think this week, as the third week of racing, has signalled my highest running mileage to date with 57.5 miles. So this week is definitely rest time, where I'll do a couple of swims, stretching and a lot of healthy eating. Then its back to training for the Fling, and getting familiar with the trails of the Pentlands every weekend.
at March 21, 2011